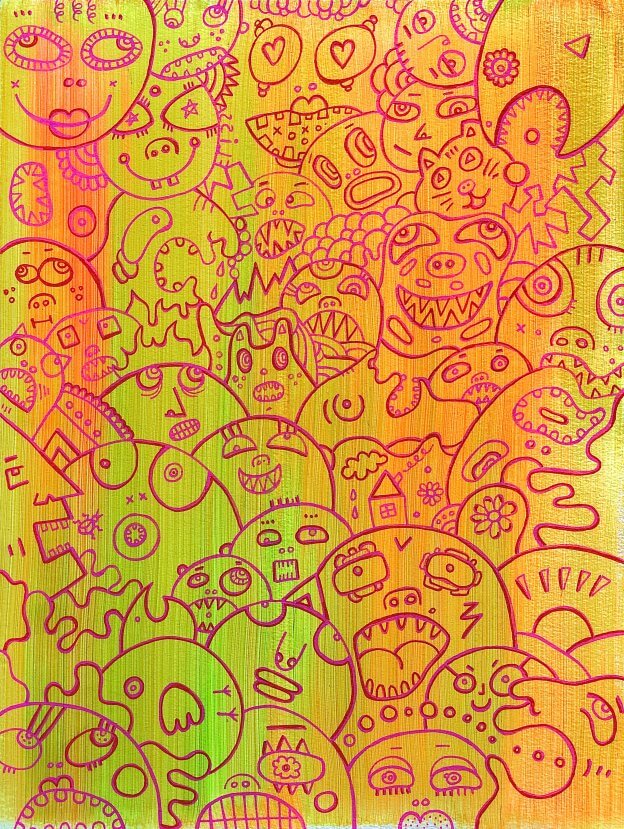 Melissa Vipritskaya Topal is a Russian-Turkish contemporary artist working in London. She grew up in Moscow in an international family, surrounded by art, music, and theatre. As an artist, she was shaped by several key factors of identity, and the multiculturalism of the environments where she developed as a person became crucial. Since childhood, during summer, she has absorbed the intense colours of oriental spices, the sea and carpets of the endless bazaars of Istanbul and was then surrounded by Russian culture in Moscow during the rest of the year.

Her earlier works created in Moscow are black and white, abstract, reflecting the very feeling of being among a monochrome, faceless and tense crowd. The theme of loneliness in the crowd and the desire to explore this phenomenon originated in Moscow. Her works which can look like a doodle at first glance do not show cartoon characters, but an endless number of faces around her every day. From the initial idea of the aggressive chaos, having moved to England, she came to study people’s emotions. In her works, neither a single “face” is duplicated, nor the unique characters of people around are repeated. The crowd ceases to be a single organism, breaking up into an infinite number of different personalities.

She gradually switched to vivid colours after her move to London albeit preserving her interest in contrasting and juxtaposing.

Melissa’s art is her way of self-discovery/understanding and a voyage in her inner self to reproduce memories or feelings, her thoughts. While creating, she is always balancing between her intuition, reason and heart. She prefers to give space to the viewer to think, rather than to explain what the painting is about. She creates a space with her paintings where the spectator can immerse in own thoughts.

As a person who has travelled a lot, she pays attention to the issue of psychological comfort and adaptation of a person in a society. Endless emotion “faces” remind that all people are different by the nature and one cannot fall into a state of frozenness, being lost in the crowd. It is important to be yourself and follow your dreams, to go against the flow no matter what and to know what you want. People manifest themselves sincerely only from the sensation, not from the head, everything she creates is intuitive by nature and she would like people not to be afraid to return to themselves as they are.

Music was another important factor of her identity. It became not only her friend in formation of taste, but also a topic under study. Being a keen cellist, its visual presence was shown in a series of abstract sculptures representing musical instruments. Inspiration can come to Melissa spontaneously, and the very process of creation grows into an intuitive flow action, similar for her to ordering chaos in space. She pays great attention to the “order” and perfectionism in her works, assessing each time whether the technique accurately conveys the feeling she recreates from a thought form in a material object. Melissa always keep track of how high-quality the material is, trying to preserve the “purity of performance” through it. Finding a suitable material for her is an opportunity from time to time to free herself from imperfection in the world.

Her creation process generally starts with small digital sketches in notes on her phone, as she says that her best ideas always come while she is on the road. Melissa uses a wide range of contemporary art materials and drawing media, but her favourite is acrylics, such as ink, heavy body and high flow acrylic paint, markers, spray paint, and other acrylic mediums.